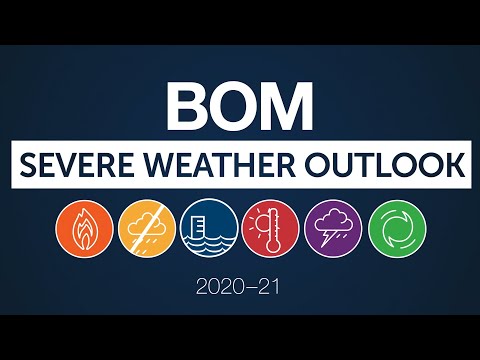 Check the chance of severe weather, including:

The tropical cyclone season runs from 1 November to 30 April

Tropical cyclone season outlooks are issued in the second week of October each year.

The July, August and September SOI and NINO3.4 values were used in making the tropical cyclone season outlook.

Percentages such as a 60% chance of having more tropical cyclones than average (or a 40% chance of having fewer) mean that for every ten years with similar climate patterns to those currently observed, six years would be expected to have an above-average number of tropical cyclones and four years would be expected to have a below-average number.

During El Niño events, there are typically less tropical cyclones than average, while more tend to occur during La Niña events. As always, it is essential that all local communities prepare for the cyclone season regardless of the outlook.

Over the entire Australian Region, this statistical relationship has proven to be highly accurate, or a skilful way to forecast tropical cyclone activity. However, across the sub-regions this relationship, and thus forecast skill, can vary. Some regions have much higher forecast skill than others. The Northwestern sub-region has good skill, while the Western and Eastern regions both have low skill and the Northern region has very low skill.

This outlook is based on the status of the El Niño–Southern Oscillation (ENSO) over the preceding July to September. Sea surface temperatures in the tropical Pacific Ocean have been below average since May and remain below average. La Niña was declared on 29 September 2020. All surveyed climate models suggest ocean temperatures will remain at La Niña levels until early 2021. Atmospheric indicators of ENSO are also consistent with La Niña patterns.

The outlook indicates that an average to slightly-above-average number of tropical cyclones is most likely in the Australian region and all sub-regions for 2020–21.

Unless otherwise noted, all maps, graphs and diagrams in this page are licensed under the Creative Commons Attribution Australia Licence